Camping Along The Coast 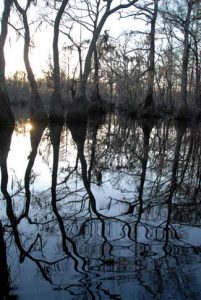 If your idea of camping is an air-conditioned luxury RV with indoor plumbing, Wi-Fi, and a grocery store on site…this list may not be for you.

No offense meant to the glamping crowd, but when I hear the word “camping,” I don’t think of cabins with central air sitting on cement foundations. I picture a cozy tent deep in the woods, nestled in the rolling sand dunes, or perched on the edge of a body of water. Some place where you can fish for your dinner, spot eagles flying overhead, and cook over a campfire. Maybe even somewhere you have to hike or canoe to, leaving the road far behind you in favor of peaceful, undisturbed nature.

Eastern North Carolina is home to some of the state’s wildest places, and camping can be one of the best ways to explore them. The region offers some great options when it comes to where you choose to pitch your tent – and many are just a short drive from the Outer Banks. So pack up your tent, your fishing pole, your kayak, and venture out to…

If you’ve ever dreamed of having your own private island (or spending the night next to a ghost town), head south past Ocracoke to Portsmouth Island, the only place on the Outer Banks where you can camp directly on the beach. The whole island is only a few miles long, and located close enough to Ocracoke that an experienced kayaker could paddle right on over. Alternately, Ocracoke’s Rudy Austin operates a small passenger ferry from Silver Lake and will drop you and your gear off on the north end of Portsmouth Island and then pick you up when you’re ready to return. Austin will also entertain you on the ride over with his Ocracoke brogue and island tales. A vehicle ferry from Atlantic, N.C. to the south end of the island is available for visitors who want to bring their four-wheel drive.

It’s hard to believe this tiny island was once the largest European settlement on the East Coast. The village was established in 1752, and for more than a century it was an epicenter of shipping and trade. But a combination of circumstances including hurricanes and Civil War skirmishes drove almost all of the residents and businesses away. The last two people on the island, a couple of stubborn elderly ladies, reluctantly agreed to relocate in 1971.

These days the remaining buildings of the Village are maintained by the Cape Lookout National Seashore, and visitors to the island can explore them in between camping, fishing, crabbing, shelling, and playing on the beach.

When Kill Devil Hills local Jeff Hanson camped there with his son and the rest of his kayaking club in 2004, he was a little surprised by the challenge getting there presented.

“It’s a long paddle crossing the inlet, and the weather can change as you’re coming across. We had a grueling paddle to get there, but then you land on this beautiful beach; completely deserted. We fished, and we crabbed, and we lived off the land a little. The marshes are beautiful and there were thousands of big, beautiful dragon flies,” says Hanson.

Hanson’s pro tips for future campers? Make a checklist (which should definitely include plenty of bug spray), bring plenty of crabbing supplies to catch the blue crabs in the creeks, and keep an eye out for shells and other treasures. Drinking water must also be brought in.

Oh, and if you do paddle over, be sure to swing by the “Ocracoke Water Park” on the way – a water slide erected on a sand bar out in the middle of the sound. nps.gov/calo/planyourvisit/camping and for more info: outerbanks.com/portsmouth-island 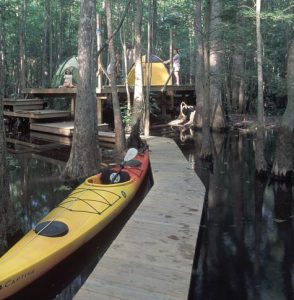 Campers paddle out to the platforms by kayak.

There are 14 different platform camping sites tucked along the scenic Roanoke River, which spans five counties in northeastern North Carolina. These platforms are accessible only by kayak or canoe.

“The Roanoke River paddle trail offers unique, innovative options for rustic camping here on the East Coast,” says Executive Director of Roanoke River Partners Carol Shields. “We have people come from all across the country to have that experience.”

That “experience” might be wildly different depending on how you’d like to spend your platform camping trip. Some campers choose to paddle out to their site, set up camp on one of the raised platforms overlooking the river and marshlands, and idle away the rest of their trip there until it’s time to paddle back home.

Others prefer the challenge and the adventure of breaking camp each morning and paddling to the next site down the river, with trips lasting a week or more as they rove the whole watery trail. Along the way, sightings of deer, geese, eagles, and osprey are common, and the nights are punctuated by the sounds of owl calls and big fish splashing up to the water’s surface. 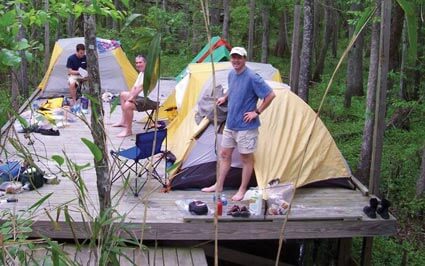 “Platform camping is getting away from the sites and sounds of civilization and getting back to nature,” says Shields.

Shield’s number one tip for campers on the Roanoke River is to bring physical maps and navigational tools. Technology is wonderful, but she’s seen more than a few of those high-priced GPS gizmos choose that week to fail. roanokeriverpartners.org 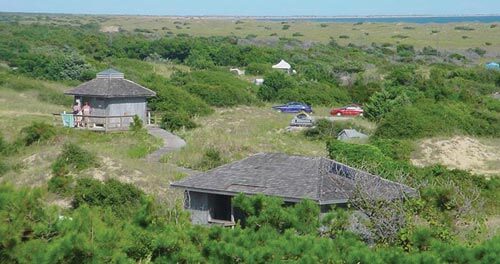 The National Park Service maintains several campgrounds within Cape Hatteras National Seashore, including Frisco Campground. At most of these, the campsites are located along the Atlantic Ocean, just behind the barrier sand dunes, but Frisco is the exception. At Frisco Campground, the tent sites are located in between the elevated dunes instead of behind them, offering views of the ocean and a surprising amount of privacy between the sites. recreation.gov/camping/frisco-campground 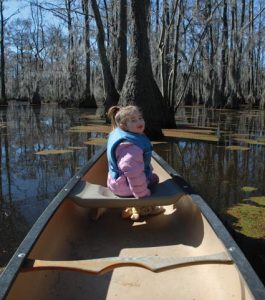 Karen Loopman-Davis, co-owner of the Outer Banks Brewing Station, has camped at Merchant’s Millpond State Park’s canoe-in sites with her family once or twice a year for the past 17 years, and would almost rather we didn’t write about it. Its current status as a hidden gem, known only to a few campers and untroubled by crowds, is a big part of its charm. But that’s not all that makes this state park special.

“Even though it’s not that far from the beach, it’s like you’re in the Bayou,” says Loopman-Davis.

The park is a combination of hardwood forest and swamp, filled with beautiful Spanish moss and cypress trees and home to no shortage of wildlife. There’s some family and group campsites just off the road, but more audacious campers may gravitate towards their platform campsites located on paddling trails, or their primitive backpacking sites.

Wherever you choose to camp, Loopman-Davis describes it as a little piece of off-the-grid paradise. “We just sit around and eat, canoe, fish, and hike,” says Loopman-Davis. ncparks.gov/merchants-millpond-state-park 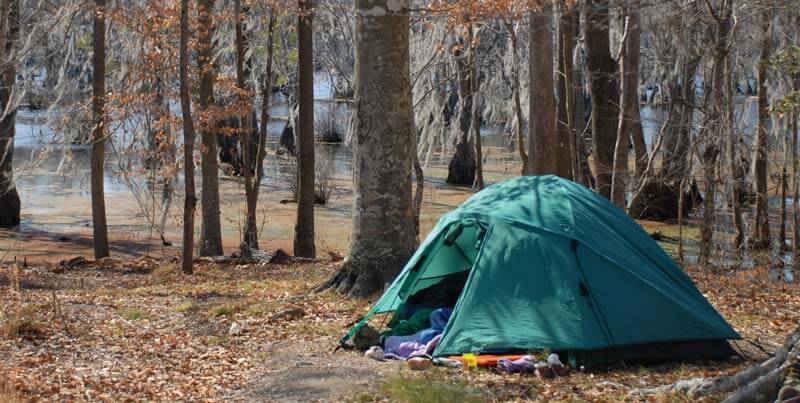 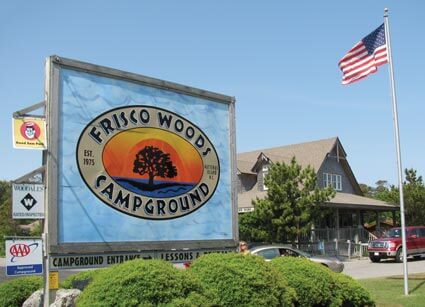 Frisco Woods Campground offers quite a few amenities that might put it more in the “glamping” category, including Wi-Fi, a pool, RV sites, and cabins with electricity and air conditioning. But this soundside campground merits inclusion on this list for being a haven for a different type of outdoor adventurer- the water sports enthusiast. The pitch-perfect wind and water conditions here make it a huge draw for kiteboarders and windsurfers, and they even host competitions and other events throughout the year.

And for the purists, don’t worry. There are a few primitive tent camping sites tucked into the trees. thefriscowoodscampground.com 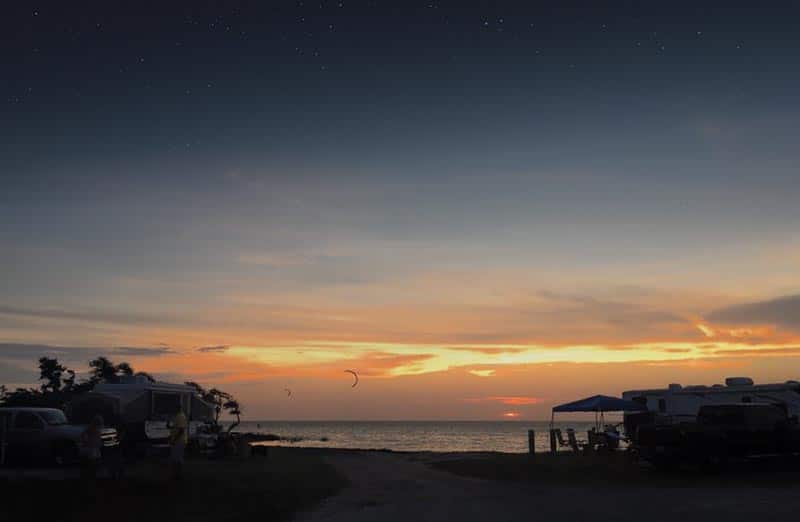 You can’t pitch a tent in Kitty Hawk Woods, but by camping at the tent-only Adventure Bound Campground you can at least come close. Adventure Bound Campground is settled right on the border of the stunning maritime forest, and just a mile and a half from the beach. Campers can hike through the woods, launch their kayaks at the boat ramp a quarter mile away and take a paddle trail though the trees, ride the nearby bike path, or just relax in the shade of the towering cedars surrounding their tent.

So whether you want to pitch your tent under the trees, along the river or tucked in between the sand dunes, chances are northeastern North Carolina has just what you are looking for. From the Roanoke River, to the deserted beaches of Portsmouth, and everywhere in between, adventure awaits. adventureboundnc.com ♦ 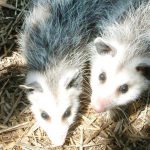 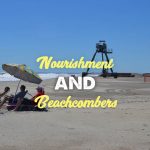