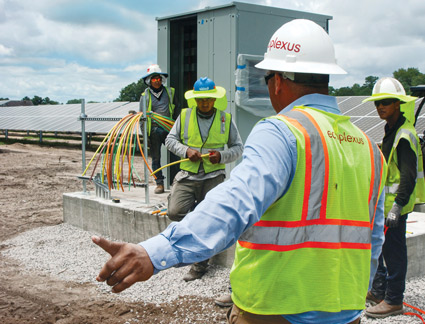 When Currituck County’s Grandy solar farm goes on-line this fall (its third), it will generate 18 megawatts of electricity on the 118-acre parcel in Grandy, and will bring a four-year permitting process to an end. The new facility joins current farms located in Shawboro and Ranchland.

The 55,000 dark blue fixed-position solar panels are expected to produce enough power for 2900 homes, according to John Morrison, Ecoplexus Senior Vice-President of US Operations. Ecoplexus doesn’t sell the electricity directly to customers but is selling it to Dominion Electric for sale to customers on its grid. There is no estimate as to how much of the electricity will go to local customers, or how it may affect local electric costs.

“The grid acts like a giant pond and the power flows to where it’s needed,” Morrison said.

Ecoplexus, which describes itself as “a leader in the development, design, engineering, construction, financing, operations, and ownership of renewable energy systems for the commercial, government and utility markets,” currently has projects in five countries. The Grandy project is its first in Currituck, but is one of 3 projects in development in North Carolina.

The Grandy solar farm covers 58 acres of the total parcel with the remaining area serving as a buffer between it, and local business and residential areas. During permit hearings, Ecoplexus pledged to leave as many trees on the property as possible to hide the panels and to plant new shrubbery as needed. In fact, after removing some trees, the company planted 5,500 trees.

In addition, the company said it would remove 2,200 sq. feet of cart paths from the former Goose Creek Golf Course to improve drainage. Morrison said the company is working to retain storm water at the site to reduce impact outside of the property.

Currituck Sunshine Farm, Ecoplexus, and Fresh Air Energy began the permitting process in 2015 with requests for rezoning of frontage along Caratoke Highway as well as rezoning of the former golf course for use as a solar farm. 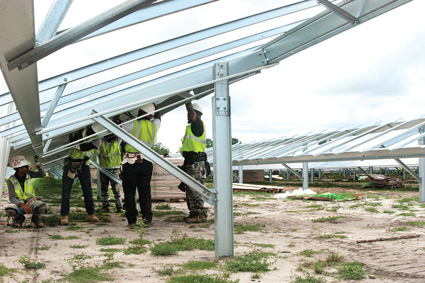 Currituck Commissioners rejected those requests in 2016 after residents raised concerns about drainage problems at the site, construction noise, the unsightly appearance of solar farms, and worries about the effects of hurricanes on the panels. The three companies appealed that decision to the Currituck Superior Court which upheld the county’s ruling.

A 2017 appeal to the NC Court of Appeals resulted in an unanimous ruling that “the Board’s denial of the application was not based on competent, material, and substantial evidence to rebut Petitioners’ prima facie showing.” The court granted approval to the county to impose conditions on the project as it moved forward.

Ecoplexus began the construction on the new Currituck solar farm in early 2019 after receiving the necessary permits. Morrison estimates that approximately 150 workers have been involved with the project. All of the current workers on the site are from the local area, according to John Hunt, Senior Construction Manager for Ecoplexus.

Tracy Sample, Currituck Tax Administrator, won’t determine the new tax rate for the property until it’s completion but, based on tax figures for the Shawboro site, the county will probably receive over $19,000 annually in taxes, compared to the $2,500 paid for the property in 2019.

Maggie Clark, Southeast State Affairs Senior Manager with SEIA, says that several large retailers in North Carolina have begun using solar at their plants. Notable ones are Apple, IKEA and SAS. Overall, she says the industry has created nearly 7,000 jobs in North Carolina and, with the cost of solar panels dropping by 34% over the past five years, the industry is expected to continue to grow.

“Solar is generally accepted in North Carolina, but we are seeing fewer solar projects because the projects are getting bigger,” Clark said. “Solar started in Northeast North Carolina because of the flat land there. Now that that area has been developed, the industry is expanding into areas in the central and western parts of the state, especially Charlotte, Asheboro and Greensboro.”

Clark said solar has continued to grow around the globe since it “has a downward pressure on rates because it has no fuel costs, whereas natural gas and coal prices are unpredictable. Once it’s installed, it’s generating very cheap, clean energy.”

“We have been cognizant of local feedback on solar projects and have been working with developers to ensure that they are doing business with the local communities to make sure there is buy-in up front,” she said noting that solar companies try to be “good neighbors” in the communities they work in.

One sign of this willingness is the addition of native pollinator friendly vegetation around the Grandy solar farm site. “This is what we do at all of our sites,” Morrison explained. “It costs a little bit more but there are good seed suppliers in North Carolina. We are engaged with the Nature Conservancy to see how solar farms can improve pollinators at our sites.”

Morrison said the average lifespan of a solar farm is 30 years because the 40×78 inch modules degrade over time and produce less power. Whether the company replaces those modules will be an economic decision.

According to the company website, Ecoplexus has completed or has facilities to generate over 370 megawatts in the US. The lifetime energy generated by these projects is expected to be nearly 900,000 MWH. To date, the company says the power generated by its projects is enough to power over 200,000 homes and is equivalent to planting 800 acres of trees. ♦

Jane Elfring, a freelance writer and photographer, lives in Elizabeth City. She writes about the history and life in Northeastern North Carolina. 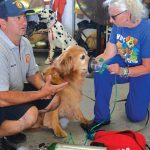 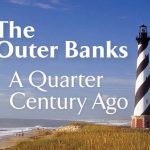