Lessons from the Unpainted Aristocracy

By Catherine Kozak
Posted March 24, 2014
In Back In The Day, Coastal Life, Design for Living
Lessons from the Unpainted Aristocracy2014-03-242017-01-23https://outerbankscoastallife.com/wp-content/uploads/2020/01/cl-masthead-horiz-color.pngOuter Banks Coastal Lifehttps://outerbankscoastallife.com/wp-content/uploads/2014/03/nhhomesmain.jpg200px200px
1 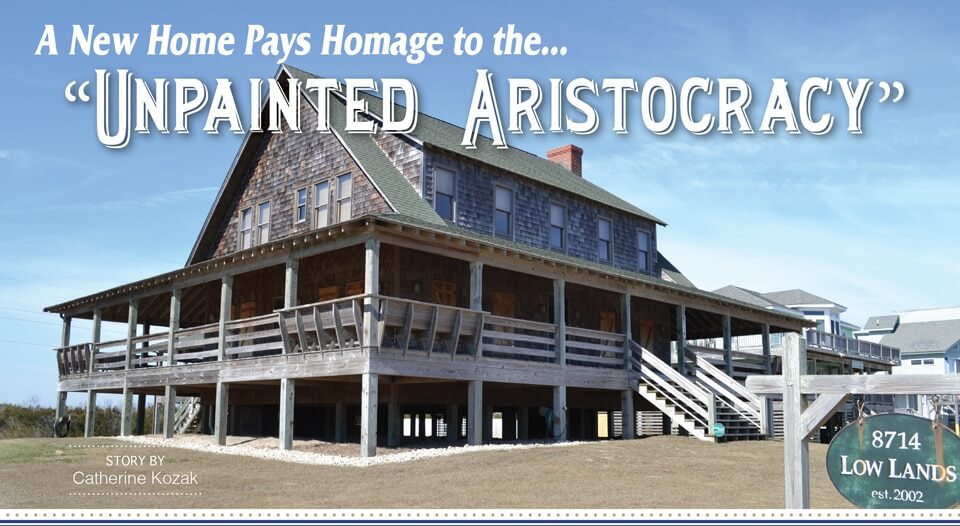 The mystique that is Nags Head is in so many ways embodied in the old weathered cottages that line the oceanfront across from Jockey’s Ridge. There’s an appealing simplicity in the wooden frame houses, set on pilings so the ocean can go under them, wrapped with porches so friends and family can sit and savor the splendor of the sea. Unpainted cedar shakes on the exterior walls and roof have aged to the color of driftwood, and the very house itself sways to the will of the unceasing wind.

Rugged, functional, and resilient, the historic strip of beachfront homes have not only become an Outer Banks icon, they also serve as blueprints for the distinctive Nags Head architectural style that is being copied in newer homes for miles up and down the beach. The Outer Banks started being viewed as an appealing, resort destination in the mid-19th century. Today there are nine of the original homes still standing that date as far back as the 1850s. “Old Cottage Row” which once included a dance pavilion and public bathhouse was added to the National Register of Historic Places in 1977. It was
poetically described in the following nomination:

“The regular rhythm of the one- and two-story units, the somber gray-brown colors, the rough texture of the wood-shingled walls and roofs, and the repetition of sweeping gable roofs and expansive porches relate in an almost organic fashion to the slope of the beach to the sea, and to the sand and the gray and blue water of the changing ocean. Families owned their own cottages, and returned to the casual, peaceful summer life, season after season, generation after generation, interrupted occasionally by destructive storms that forced the whole community back from the sea.” 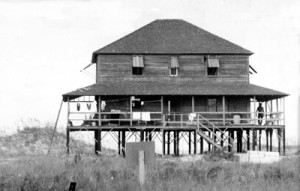 Old Nags Head cottages that had weathered many seasons stood as a blueprint for the Boidock’s to emulate. 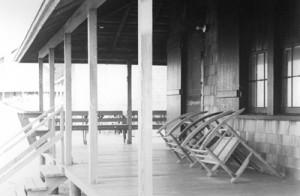 John and Brenda Boidock were so captivated by the character and design features of the “Unpainted Aristocracy” – the term given the cottages years ago by the Raleigh News and Observer newspaper editor, Jonathan Daniels – that they decided to build one just like them. Long-time visitors to Nags Head, the Boidocks, who have been married 46 years, already had a keen regard for historic architecture; their year round home is Woodford, a circa-1756 estate on Farnham Creek near Sharps, Virgina. But the symbiosis of the Nags Head style with the beach and traditional summer community is what most intrigued the couple. The seasonal return of the same families to their same cottages each summer was hard to ignore. “Certainly, one of the appeals of those houses as it relates to the architecture is the continuity,” Brenda Boidock said. “But the fact of the matter is, the architecture comes to represent that continuity.”

By the time the Boidocks decided in the early 2000s to reproduce a classic, Old Nags Head cottage on land that they purchased on the soundside in South Nags Head, some of the 60 homes originally listed on the mile-long, Nags Head Beach Cottage Row Historic District had been lost to age, weather or redevelopment. But there were plenty of them remaining, and the Boidocks had no compunction about filching a design idea or two. Or three.

“We literally went up to the old houses when they weren’t there and took our measuring tape out,” Brenda Boidock said, laughing. “We certainly plagiarized. We would drive up there and say, “You know, that roof has the right pitch. The windows are proportionally correct.’ We’d steal from here, we’d steal from there.” One time, she recalled, they were busily measuring on a porch when they were confronted by the owner. After they explained their purpose, she graciously gave them a tour of her cottage. 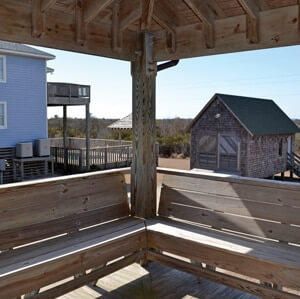 Elizabeth City carpenter/builder Stephen J. Twine is credited with honing the unique Nags Head style that the Boidocks were so intent on replicating. A small, energetic man who died in 1973 at age 99, Twine refined the coastal bungalow structures that began dotting the Nags Head oceanfront in the late 1850s. He is responsible for designing, moving, repairing, renovating and/or constructing Old Nags Head cottages from about 1910 until at least 1940. It is estimated he built more than a dozen of the 60 Cottage Row structures. Twine would typically arrive in the early spring and stay into the fall. “Mr. Twine was magic,” wrote Nancy Rascoe, in her book, The Sandy Banks Live On. “Grandmother Nixon always said that he could build and fix anything.” Rascoe, who has spent most of her summers during her long life at a Nags Head cottage her family still owns, said that the full-width front and back dormers, wide sloping roofs and porches that wrapped around three sides of the house were Twine signatures that improved on the older, boxier design, and modernized the structures. “It was either too windy or, like most of the summer, too hot,” she said. “He transformed the small original two rooms down with a loft and detached kitchen to two stories for a breezeway, kitchen and servant’s room. He built garages to replace stables and chicken coops. He repaired everything after every storm.” 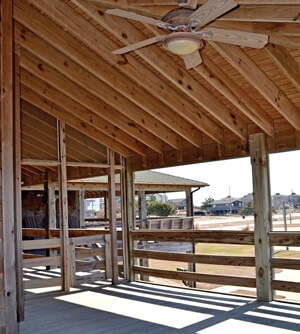 As the Historic Register appraiser described it, the old cottages, facing the unpredictable Atlantic, were designed to withstand conditions on “the weather-tortured” Outer Banks. But they also possessed practical touches that added comfort and convenience for inhabitants. Placed high on pilings above low waves, the structures could be readily moved on rollers back from the encroaching surf, a task Twine did frequently. The houses were also situated for summertime southwest exposure to make the most of shaded porches – the roof extended over the porch – and prevailing ocean breezes. As described in “Nags Headers,” by Susan Byrum Rountree, Twine had built his houses like a puzzle, that is, one piece would not move unless the others did. That technique likely explained why the houses have endured so many storms. He also angled the roofline sharply so the wind would push down on it, rather than getting underneath it and blowing it off.

After the Boidocks decided they wanted their own Nags Head cottage, they briefly considered buying one of the historic ones on Cottage Row, but opted instead to build. They hired an architect – they declined to give a name – to draw up plans. Although he did a nice job, they said, the architect took creative license and initially drew plans that changed the dormers on the second floor to give the rooms more space for closets. But the Boidocks insisted on the way Twine designed them, with the ceilings slanted sharply. “We wanted our house to have the same feel of those houses that [Twine] built,” John Boidock said.

Under protest, the architect went back to Twine’s dormer design. 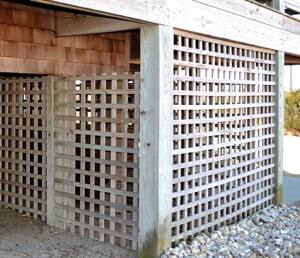 Because of his interest in traditional homes, the couple hired Calvin Gibbs, owner of Gibbs Builders, Inc. in Manns Harbor. “The builder was really the key,” John Boidock said, referring to reproduction of the Nags Head style. “He has a very strong feel for the older homes and the older construction, too.” Gibbs said he started working on old houses with his uncle in Engelhard when he was 16 years old. “I’ve been in it ever since,” he said. Gibbs, 60, said he appreciates the sense of tradition and practical design in the Nags Head cottages. For instance, the steep pitched roof not only withstands the wind better, it wastes no space. And the spacious porches maximize the cooling effect of the ocean breezes, an important attribute in the days before air conditioning. Besides being “built solid,” the quality of the lumber used in the old cottages – mostly heart pine, and thicker pieces – also contributed to their longevity, said Gibbs, who has worked on historic structures in Corolla, Roanoke Island and numerous properties in Manteo and Nags Head. “I love doing that stuff,” Gibbs said. It took about nine months, he said, to build the Boidock’s house. A few years later, their house was honored with the Nags Head Architectural Residential Style award. “I’m real proud of that one,” Gibbs said about the house. In 2011, he built his own family home in Manns Harbor to look like the Roanoke Marshes Light.

Despite their love of historic homes, the Boidocks were not interested in being purists and tweaks were added to the design of their Nags Head cottage as they saw fit. For instance, the double-hung windows are vinyl-clad, which can withstand a lot of abuse and do not need painting. They nixed the traditional hinged “blinker” window shutters for the first floor because they block too much light, and went instead for shutters that open out sideways. So far, the second floor is shutter-less. Like the old homes, Boidock’s kitchen is in the back, or west-facing, wing of the house. Although it is completely modern, with cathedral ceilings, the walls and ceilings are paneled in the traditional style with beadboard hewn from yellow pine. The downstairs of the 5-bedroom, 4 ½-bath house has beadboard halfway up the wall, with sheet rock ceilings; on the second floor, it is covered in beadboard floor to ceiling. Some of the oldest of the Unpainted Aristocracy had the kitchen in an entirely separate wing because of the fire risk. They were later attached with a screened-in porch, or used as quarters for servants. Fish scaling tables and outside showers are functional remnants of earlier days that have survived in present-day blueprints. 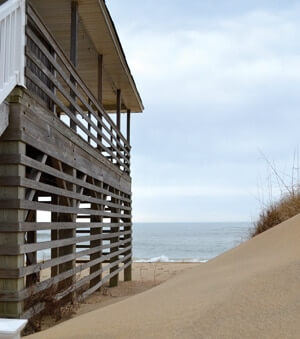 In a nod to the traditional outbuildings, a storage area, built like the old boathouses on Cottage Row, stands at the rear corner of the Boidock’s property. Rather than have latticework surrounding the foundation to keep out the free-roaming livestock, as was its original purpose, the criss-crossed wood slats at Nags Head cottages today are used to conceal the heat pump and air conditioning unit – which is another concession to comfort the Boidocks have made. Most distinctively, the Boidock cottage has an impressive wraparound porch with built-in benches, likely one of the most beloved features of the Nags Head style architecture. The classic-style benches are angled outward at the back, providing comfortable, uncluttered sitting spaces. But the Boidocks made their porch even wider, giving it an extra-expansive feel. With the rear of the house facing west, the porch is backlit by beautiful sunsets most summer evenings and graced at the front by glorious sunrises over the ocean. The porch, complete with a traditional rope Nags Head Hammock, is not surprisingly the couple’s favorite place to entertain or just read a book.

“It’s a real sense of relaxation to be on that porch,” Brenda Boidock said. “You can always go to some corner of the porch and find a breeze – always.”

Few homes are built as exacting as the Boidocks’ cottage but “Nags Head style” has become a big selling point in real estate marketing on the entire Outer Banks. If a building is covered with cedar shakes, has a sloped roof and even a partial porch with built-in benches, it’s good as gold. It has that Nags Head allure borrowed from the time-honored architecture that S.J. Twine perfected.

“The dictates of survival and convenience on the weather-battered Outer Banks, not the whims of fashion, dictated the form and detail of the cottages built at Nags Head,” wrote Catherine W. Bishir in ‘The ‘Unpainted Aristocracy:’ The Beach Cottages of Old Nags Head.

“Functional characteristics established during the early years, proving themselves serviceable, have shaped Nags Head construction to the present, giving the area a distinctive style of building all its own.”  Photography by Susan Selig Classen unless otherwise credited.♦

Catherine Kozak has worked as a writer and reporter on the Outer Banks since 1995. She lives in Nags Head and enjoys running in the woods with her dog, Rosie. 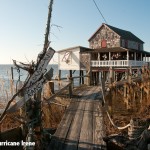