We see them up on the lifeguard stands, making water advisories and responding to emergencies. Occasionally we even talk to them to inquire about ocean conditions. But most of us don’t know what exactly makes up a day in the life of an Outer Banks ocean rescue lifeguard.

My Outer Banks Home followed a few Kill Devil Hills Ocean Rescue lifeguards around for the day to get an inside look. 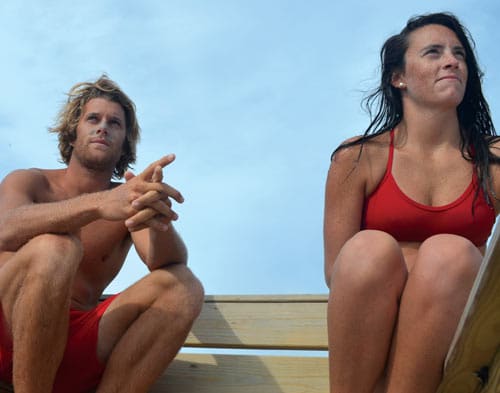 Above From Left: Lifeguards Nathan Lowdermilk and Taylor Simmons check the morning surf from one of the town’s lifeguard stands. Photos by Michelle Wagner and Sue Colao.

On this particular day in late May, Taylor Simmons and Nathan Lowdermilk were among the 25 or so lifeguards who gathered at the beach in front of the Ocean Bay Boulevard lifeguard headquarters at milepost 8.5. With fins in hand, their day begins at 8 a.m. sharp, two hours before they take their posts at one of the town’s 21 lifeguard stands that span five miles of beach.

The morning starts off with physical training, or PT, which is held three days a week through the season. During this morning’s PT, the squad ran two miles on the beach, swam from stand to stand for a stretch, and finished the training by jumping off Avalon Pier, a long-held ritual the Kill Devil Hills squad performs at the beginning of each season.

The annual jump prompted a fair number of the off-duty lifeguards to show up and participate in PT “just for fun.”

“The goal for the day was to get some physical activity, but also to come together as a group,” says David Elder, whose official title as the man in charge is ocean rescue supervisor, but he’d much prefer you just call him a lifeguard.

To even get to this point, the lifeguards had to perform a little more than 80 hours of training, and become certified as First Responders and in CPR and First Aid. Although they are certified, training is an ongoing process throughout the summer. 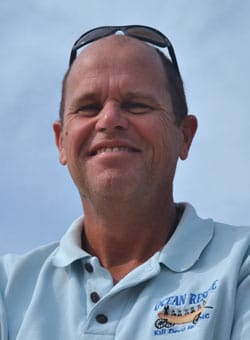 Elder supervises the lifeguard squad, most of whom spend their day on the stand keeping a watchful eye on their “territory” and being prepared to assist if a situation develops in a neighboring stretch. Stands are divided up into four zones, with a supervising lifeguard on an ATV in charge of each zone.

After morning PT, the lifeguards head back to their headquarters to gather up their gear, get a quick briefing for the day and munch on sandwiches from the deli across the road.

To the layperson, the building itself is full of strange sights and mementos. A “Lifeguard on Duty” sign, plucked from the wreckage after Hurricane Hermine took out the Ocean Bay Boulevard stand, is proudly displayed on the wall and bears the signatures of all the lifeguards from last summer. On another wall are three “Rescue Randy” practice dummies dressed in their finest colorful beach wear, which the lifeguards use routinely during surprise drills throughout the summer.

With gear in hand (or strapped to an ATV), it’s time to head out to the beach.

Simmons is in her fourth year as a Kill Devil Hills lifeguard, and today she’s watching over the water at Ocean Bay Boulevard. Simmons goes through the routine of setting up her stand, putting up her umbrella and writing a message on her advisory board for beachgoers. Finally, she strategically places her fins and buoy in the sand between the stand and the ocean so that they are in arm’s reach if she needs to get to the water in the hurry.

“Almost every day you’ll have a feeling, like being nervous. That’s a good thing. You should be on your toes, ready for anything that can happen,” says Simmons. 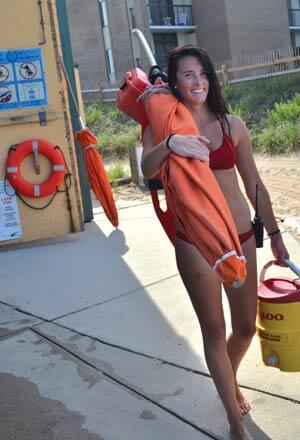 It’s a strange job certainly. Lifeguards have to remain vigilant, physically and mentally prepared for a variety of dire situations that might arise. They’re trained in handling cervical spinal injuries (at least until EMS takes over), seizures, heat stroke, lacerations, stingray and jellyfish stings, splinting, fishhooks, drowning, respiratory CPR or any other situation that may arise on the town’s beaches.

For most of the day, lifeguards are sitting – watching and waiting for something to happen. They help lost kids find their way back to parents, answer questions from beachgoers and inform them of conditions on the beach and in the water, as well as remind people to fill in those holes they made in the sand during the day.

While it’s an intense job that requires a lot, Simmons says it’s a lot of fun, too. “I love being outside and being on the beach, watching everybody have a good time,” says Simmons.

There’s no doubt that people watching is a big part of the job. A surprising amount of the rescues performed aren’t so much reactionary, such as noticing someone who is drowning and darting out to save them, as they are proactive and preventative.

Lifeguards watch for those who look like they may be struggling and respond, going in to help them before things become serious.

“We spend a lot of time looking at body language,” Elder explains. “Are people comfortable and, if they’re not, is that a situation where we should step in?”

Not long after Simmons takes the stand, a roll call is made over the radio to ensure that lifeguards are all ‘In service’. 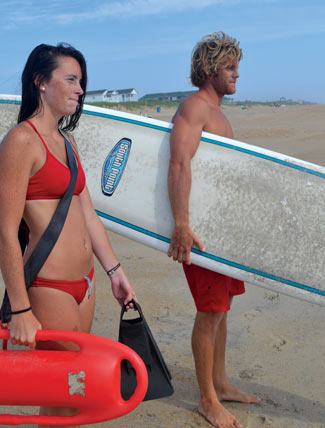 ‘Ocean Bay in service,” Simmons says into her radio at 10 a.m. Her 7.5-hour day on the stand is just beginning.

Nathan Lowdermilk stops by shortly after to see how things are going. A seasoned guard who has been patrolling Kill Devil Hills’ beaches since 2011, Lowdermilk is one of the supervisors on ATVs today. With eyes on the water the whole time, the two share stories about some of the more thrilling rescues they’ve made or witnessed.

Last year, Kill Devil Hills Ocean Rescue made more than 500 rescues during the summer and witnessed more cervical spine injuries than during a typical summer. A C-spine is a devastating injury that typically happens when the waves crash onto the beach and cause a swimmer to tumble and hit the sand at an unfortunate angle.

But Elder said he’s hopeful that, much like PSAs and publications that advise swimmers on rip currents, there will be similar education when it comes to prevention of cervical spine injuries that occur on the beach. These advisories, among other things, would advise swimmers that it’s much safer to go under a big wave breaking on shore than it is to go over it. Beachgoers, he adds, should always pay attention to approaching waves whether they are at the water’s edge or in the water. 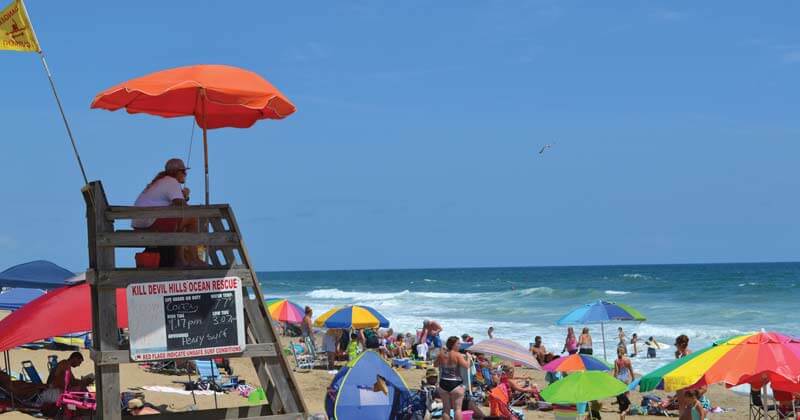 Elder encourages beachgoers to talk to the guards. “It’s a good idea for beachgoers to take advantage of the expert knowledge of our lifeguards and just ask them what the conditions are like that day.”

Lowdermilk concurs. “Always talk to the lifeguards to find out where the rip currents are pulling, where the sandbars are, and where you should swim, even if you’re a good swimmer.”

Fortunately on this day, the ocean conditions were calm, but the lifeguards remain vigilant because even on calm days, emergencies can happen.

At 5:30 p.m. every day, the call comes over the radio. “1730 hour Check in”, signaling the lifeguards to pack up their stuff and head back to Ocean Bay.

Once there, the guards spend the next half hour cleaning up equipment, restocking first aid kits and supplies, making reports and prepping for tomorrow. Today was a good day, but tomorrow could bring almost anything. And the lifeguards of Kill Devil Hills are ready for it. ♦ 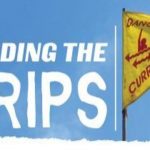 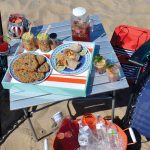