Lionfish: Intruders Of The Deep 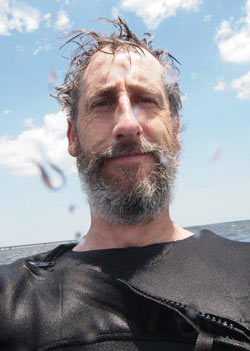 Diver Marc Corbett out in the water.

As Marc Corbett worked his way down to the E.M. Clark shipwreck off Cape Hatteras with the dive anchor, he spotted the perfect place to escort the other divers on his charter.

He reached for a piece of metal to attach the anchor and received a jolt of fear as a lionfish darted away. Before the question, “Did it get me?” could fully develop in his mind, a jolt of pain spread through his hand.

“It was horrible,” Corbett recalls. “The amount of pain those things put you in is astounding. It got me through my glove, only hit me in one place. I could imagine it would be pretty bad if it hit you in a number of places. You’ve definitely got to be careful down there not to touch one.”

While area divers don’t hear an abundance of stories about lionfish stings, lionfish sightings have been on the upswing for years. Corbett has been tying anchors for dive charters like Lion’s Paw and Under Pressure since 2010 and saw his first lionfish as soon as he started diving in the warmer Gulf Stream waters off Cape Hatteras.

The one that got him was in about 250 feet of water straight out of Hatteras Inlet: “You used to see four or five of them. Now you see hundreds,” he says.

Shawn Harper, who serves as Dive Safety Officer for the North Carolina Aquarium on Roanoke Island, couldn’t believe what he saw on his first dive when he arrived here in 2016.

“I was like, ‘Whoa, these wrecks are just loaded with lionfish,’ ” Harper recalls. “I had spent time diving in Florida as well as Belize and hadn’t seen as many in those two places as I had in North Carolina.”

As most folks are aware, lionfish don’t belong anywhere in the Atlantic, let alone anywhere near the Outer Banks. The invasive species is a wildly popular aquarium fish in America, but is native to the warmer waters of the South Pacific and Indian oceans. According to the National Oceanic and Atmospheric Administration’s National Ocean Service website, lionfish were first spotted in Florida waters in 1985 but rapidly multiplied and spread in waters along the East Coast.

A diver participates in the “lionfish rodeo.” Photo by John McCord/Coastal Studies Institute

“They just came up with the Gulf Stream current and have affected reefs in Georgia, South Carolina and North Carolina as their population expanded,” Harper explains. “They’re down throughout the entire Caribbean and South America, too.” 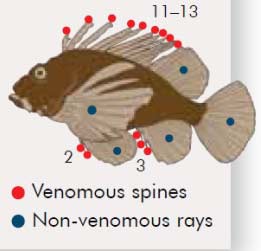 Harper’s first run-in with a lionfish came in Belize. On a mission to spear and collect some of the invaders, he got a “little stab” in the tip of his thumb.

“We were prepared for it…I got my hand in hot water in less than 15 minutes,”Harper says, explaining that hot water denatures the proteins that make up the venom and lessens the impact. “I got some swelling, some pain, but not as bad as some people I’ve seen who had to delay hot water treatment.”

Like Corbett, for instance. Since he was helping lead a dive, he elected to tough it out after the lionfish got him.

“All the sudden my hand just started burning. I did my dive – I don’t know if that was the smartest thing in the world,” Corbett admits. “It was real bad for about two, three hours, then started getting better after that. It lingered all through the next day. It’s everything they say it is, that’s for sure.”

In addition to the threat they pose to recreational divers, lionfish do plenty of damage to the local ecosystem. They aren’t big – juveniles are just an inch long and adults top out at 18 inches – but they have no natural predators in the Atlantic, explains Dave Sybert, who enjoys working at a local dive shop and also serves as K-12 Education Specialist for the UNC Coastal Studies Institute.

“They eat a lot of bait fish and some of the things other fish need, so other fish aren’t as likely to be there and survive,” Sybert says. “They lay thousands of eggs at a time, so they repopulate and spread very quickly. Once they’re there, there’s not a good way to get them removed.”

And believe them, they’ve tried!

When Harper arrived at the aquarium, he learned that the primary conservation work being done at the Roanoke Island facility involved the well-known sea turtle program. Harper put together a proposal to make lionfish counts and then do collections off Cape Hatteras, and the project was approved the last two years.

Divers were invited to what Corbett calls “a lionfish rodeo.” The effort netted 194 lionfish, about 100 of which came from the dive site of the Tarpon submarine. The fish were captured with small spear guns and tubes. Back at the aquarium, scientific data was collected: length, weight, sex, stomach contents. Some of the fin clippings – no longer venomous as the proteins break down – were used during children’s camps at the aquarium for projects like making earrings and necklaces.

Many of the lionfish got sent to Austin’s South Island Seafood in Rodanthe to be professionally processed for restaurants. The aquarium has even held a series of seafood cooking classes and yes, lionfish has been on the menu.

“So far everyone has really enjoyed it,” Harper says. “It’s very mild, almost a flavorless white meat. It’s a smaller fillet, similar to flounder, but the texture might be more similar to grouper. Because there’s not a lot of flavor, you can really do a lot with it.”

Other than the fact it makes for good eats in everything from a stew to fish tacos to a ceviche – do a Google search for lionfish recipes and you’ll get more than 150,000 hits, including a series called “Eat the Enemy” — what else did everyone learn from the count and capture experience?

We may be fighting a losing battle. 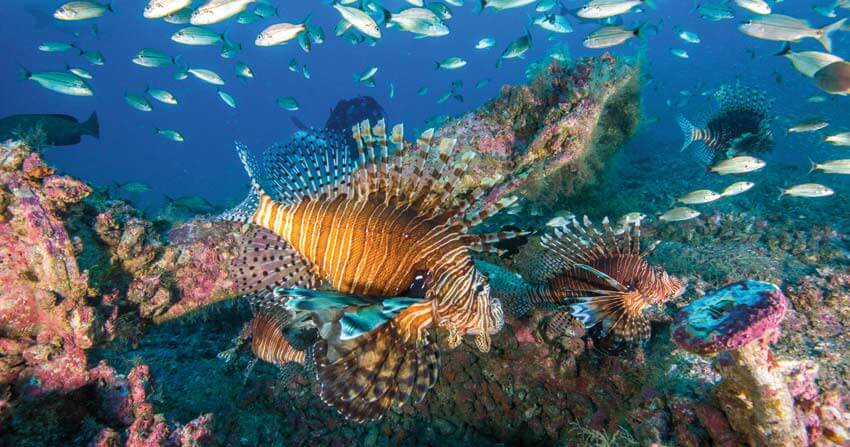 “The Tarpon, we hit it once in August and again in September, and it seemed a little thinned out in September,” Harper says. “By the time we got back in November I thought it would be more slim pickings, but actually there were more than the two previous times we were there. They have no natural predators here in the Atlantic. If they can fit it inside their mouth, they’re gonna eat it. They develop sexually very young and can produce a lot of eggs. They mate throughout the year and can live up to 30 years old. Once they set in, they really just explode.”

Harper says he’s working currently on a proposal to North Carolina Sea Grant to develop a new lionfish trap program, hoping that purse traps near some Hatteras wrecks might help catch more at one time. Divers, after all, can only get so many at once with their limited time below.

For anyone who has been stung by a lionfish, though, they’re happy to take part in whatever eradication program they can.

“Kill every single one of them,” Corbett says. “They’re not supposed to be here. While they may look pretty, they certainly pack a wallop. We’ve certainly killed a bunch of them, but there’s no shortage of them out there.”

Despite this new threat around the Hatteras wrecks, recreational divers haven’t been scared off. In fact, most divers are happy to grab a pole spear and tube and try to catch a few.

“It almost seems like it draws divers, just like with the sharks,” Corbett says. “I can’t remember a whole lot of people stung by them. I’ve been diving these wrecks eight years now, probably out there as much or more than anybody else, and I’ve only been stung once. It’s not the biggest threat in the world.”

Still, it’s nice to know someone’s got an eye on the lionfish, trying to make sure they don’t roar a little too close to home.

“We’ve not seen them on Second Street or anything like that yet,” Sybert says. “I think that’s what the aquarium is trying to figure out, what’s the northernmost range?”

Here’s hoping the only lionfish north of Hatteras can be found in the North Carolina Aquarium’s exhibit, where the beautiful invaders and their venomous spines remain safely tucked away behind the glass. Tap away all you want – your fingers are safe there. ♦ 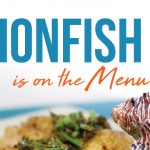 Lionfish Is On The MenuAnimals - Wildlife, Coastal Life, Seafood 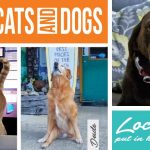