The so-called Oyster Wars of the 1880s and 1890s in the Pamlico Sound off of Ocracoke were a brief, intense period pitting local residents against outsiders. And on another level, opportunity against tradition and conservation.

The Pamlico Sound Oyster Wars weren’t as lengthy or violent as the identically named conflict in the Chesapeake Bay and in the waters off of Virginia – a battle between Maryland, Virginia and northern oystermen. That one lasted well into the 20th century. But it introduced issues that legislators and regulators and those who make their living working on the water still wrestle with today: over-harvesting, environmental sustainability, and the balance between commerce and resources.

Oysters have been harvested and eaten for generations by native populations on the North Carolina coast. Originally harvested by hand, European settlers began to make oyster tongs – long, wooden-handled, scissor-like instruments that removed oysters from underwater beds in mostly shallow waters. Maryland oystermen working the Chesapeake Bay, which during the 1880s supplied almost half of all oysters consumed around the world, fashioned dredges that were pulled behind oyster sloops, or skipjacks, scouring the bottom and bringing up thousands of oysters at a time, but also destroying oyster beds.

North Carolina law in the early 1800s required that oysters in state waters be harvested only by hand or tongs, though by 1855, dredges were permitted limited use on privately managed areas, wrote Ocracoke historian Philip Howard in a 2015 piece – the 1890 Ocracoke Oyster War. Oyster beds were worked mostly on a “first come, first served” basis until the late 1850s, Howard wrote, when the state legislature established a system for licensing and marking off coastal waters. Beds up to two acres were permitted, and the law was amended in 1873, allowing up to 10-acre sites. Finally, in 1882, all forms of oyster dredging were prohibited, in order to protect the interests of North Carolina watermen and the oyster breeding areas.

Howard went on to say that two years later, U.S. Navy Lieutenant Francis Winslow Jr., went to the Fishermen’s Convention in Raleigh and proposed a more robust, privately controlled oyster industry in the state. Given the go-ahead by administrators, he began a survey of oyster producing estuaries in April 1886, including the Pamlico Sound. The comprehensive 135-page report was completed in 1888 and published in January 1889 in the U.S. Coast and Geodetic Survey.

The North Carolina Oyster Wars was a large piece of U.S. oyster history, but what about oysters today?

Katherine McGlade is an example of how to go about oyster farming in the 21st century, in “They Practically Sell Themselves.”

Demand for oysters increased through the 1880s, and in 1887 the state legislature, anticipating a commercial windfall, revised its oyster laws. Both residents and non-residents could stake claims to 640-acre sites in waters deeper than eight feet and more than two miles off shore. Dredging would be permitted on those sites, and owners of those sites were permitted to take seed oysters from public grounds for the purpose of planting on their claims. This is according to former High Point University history professor Kathleen Carter in a paper studying the Pamlico Sound oyster industry from 1880-1900.

Winslow’s report painted a tepid picture of the state oyster industry and said that public grounds were in poor condition and unimportant. Yet shortly after the report was published, he became general manager of the Pamlico Oyster Company in Ocracoke. He advertised in the New Bern Daily Journal in October 1889, seeking oysters and oyster sloops of one thousand bushels capacity. Residents surmised that Winslow sought to enrich himself with the information he gathered rather than to help protect and manage local oyster beds. Winslow was part of a wave of oyster dredgers from Maryland and Virginia, who often didn’t adhere to territorial boundaries, and who could pull in as many oysters in an hour as a tonger could in an entire day, Howard wrote.

Tensions escalated between residents and non-resident dredgers, coming to a head in one incident in early February 1890. Approximately 40 Ocracoke natives confronted Winslow and his workers and forced them off of his oyster beds. The Wilmington Messenger published a short piece about the incident on February 5, 1890 under the headline “Civil War in Hyde County.” It began:

“Ocracoke Island is in arms. Lieutenant Winslow and his oystermen have been driven from the waters before the muzzle of shot guns. It appears that Lieutenant Winslow, representing his company has been paying a certain price for oysters. The Virginia pirates came in and offered higher prices. Lieut. Winslow went to New Bern and hired a corps of oystermen. When they arrived the natives of Ocracoke Island, who have always considered the grounds theirs and have jealously guarded their prerogative, went out with shot guns and drove the lieutenant and his workman from the waters.”

The article also reported that Hyde County Sheriff J.R. Roper was called upon to arrest several of the Ocracoke islanders identified in the confrontation, but that the men resisted. When Roper ordered fellow islanders to assist in the arrests, “they absolutely refused and declared they would also resist to the death even if the whole state of North Carolina were to come upon them.”

According to Howard, Roper contacted Gov. Daniel Fowle and requested troops to suppress the rebellion. Fowle refused to send troops and said that local courts and law enforcement should handle the matter, but warned Ocracoke islanders that justice would be served. The islanders identified eventually turned themselves in, and a trial took place May 13, 1890 in Hyde County Court, pitting Winslow against five Ocracoke oystermen (B.B. Bragg, Samuel Bragg, Isaac O’Neal, Robert O’Neal, and Warren O’Neal). Though the islanders provoked the confrontation, Howard wrote, court testimony said that the islanders sought only “a peaceable interview.” It was established that both sides were armed, and both plaintiff and defendants pleaded self-defense. The jury acquitted the islanders.

“…if any dredgers are found continuing to ravage the oyster beds, they will be arrested, even if their boats have to be blown out of the water and their crews killed.” –The Norfolk Virginian reporting on armed militia heading to the Pamlico Sound, January 21, 1891

Meanwhile, the Pamlico Sound oyster harvest continued. In 1890, the sound produced 2.7 million bushels of oysters, compared to 100,000 bushels just three years earlier. The difference was that an estimated 250 dredging vessels from Maryland, Virginia, Delaware, and New Jersey were working the waters in 1890 and harvested 1.8 million bushels, according to a 1903 report by the U.S. Commission of Fish and Fisheries, and highlighted in Carter’s research paper. All 100,000 bushels in 1887 had gone to residents, and though the harvest for locals increased to more than 900,000 bushels in 1890, there was concern about depleted stocks and the long-term effects of dredging.

Complicating matters, the oyster harvest boon also meant a financial windfall for a handful of waterfront towns – Elizabeth City, New Bern, and Beaufort in particular. Elizabeth City had 12 oyster canneries in 1890, most opened by Baltimore-based companies, Carter wrote, and one account said that 1,700 people out of the town’s population of 5,000 worked in those canneries. Because of this, legislators were in favor of the dredgers, and viewed them as progress.

Hyde County state senator Wilson H. (Wilkes) Lucas, an influential figure in the legislature, argued for the elimination of dredging in the Pamlico Sound, and protecting the rights of local oystermen, sometimes exaggerating or outright making up stories of violent and gun-toting northern dredgers, according to Carter. He marshaled legislation through the General Assembly in January 1891, over the protests of lobbyists and legislators from cannery towns, that prohibited all dredging on public grounds and restricted shipping oysters out-of-state to North Carolina residents only. The law also permitted the governor to use military force for a period of three months in order to remove illegal dredgers and out-of-state poachers.

Before signing the bill into law, Fowle scrambled to man and arm the patrol vessel Vesper. He called up the Pasquotank Rifles, state guard militiamen out of Elizabeth City, and borrowed a Howitzer and ammunition from the governor of Virginia. Once the gun arrived in Elizabeth City, Fowle signed the bill and the Vesper departed for the Pamlico Sound. The Norfolk Virginian reported on January 21, 1891 that, “One or two hundred vessels owned and manned by non-residents of this state, have been poaching upon the oyster beds in the lower sounds of North Carolina. … the Pasquotank Rifles … left on the steamer Vesper for the purpose of driving off the poachers and enforcing the laws of North Carolina. … if any dredgers are found continuing to ravage the oyster beds, they will be arrested, even if their boats have to be blown out of the water and their crews killed.” That expedition and another out of New Bern the following month resulted in the arrest and trial of the captain and crew of only one vessel, as more than 200 out-of-state boats departed the area.

The General Assembly enacted new comprehensive oyster laws by March. Dredging on public grounds was outlawed, even by North Carolina oystermen. The season was restricted from October to May, and a new licensing system for oystermen was established. It also provided for culling of oysters taken from public grounds, Carter pointed out, so that large oysters would return to their beds to breed and to serve as anchors for immature oysters, or spat. The law also created an Oyster Commissioner with the power to patrol the Pamlico Sound.

Lucas was appointed the first Oyster Commissioner, at his own suggestion, while keeping his Senate seat. He administered the commission enthusiastically, Carter wrote, though unevenly and not impartially. Revenues from licensing and taxes were insufficient to maintain a patrol boat or to employ enough inspectors. Laws were rarely enforced on locals. In cases of trespassing on private oyster beds, the courts often refused to prosecute, Carter wrote, and in cases where the state charged residents who tried to claim that public grounds were instead their own private oyster beds, defendants were often found not guilty.

Winslow and his business partner even filed formal charges against Lucas in 1892, Howard wrote, accusing him of inciting local oystermen and encouraging them to all but disregard laws pertaining to private oyster grounds. Winslow’s company still had controlling interest of a wide swath of oyster grounds and continued to dredge, Howard wrote, despite efforts to stop the practice. But laws to prevent dredging were enforced more strictly, and the oyster canneries and processing plants that had sprung up in coastal towns closed.

Stricter law enforcement and the absence of out-of-state dredgers resulted in a steep decline in oyster harvests in the following years – only 40,000 bushels in the season of 1896-97, Carter wrote. In 1897, the state eased restrictions on dredging, in the belief that oyster grounds had recovered. The following season, the catch increased dramatically to more than 850,000 bushels. During the 1898-99 season, 115 dredge vessels and 950 tong boats worked the sound, Carter wrote, and pulled in a record 2.45 million bushels. A biologist who wrote reports for the U.S. Commission of Fish and Fisheries wrote that “new and extensive beds were discovered, and the supply of oysters seemed to be inexhaustible.” His observations were proven inaccurate just one year later, when the oyster harvest dropped 25 percent overall and 53 percent in areas that had been heavily dredged, Carter wrote.

By the turn of the century, out-of-state canneries and oystermen were no longer interested in the Pamlico Sound, Carter wrote, and though residents still made a living from the water, it never again reached the level of the 1890s. The Oyster Wars became a footnote in the area’s history. ♦

Dave Fairbank was a reporter at the Newport News (VA) Daily Press for 30 years. He lives in Kill Devil Hills.

Dave Fairbank is a freelance writer living in Kill Devil Hills. Dave was a sports writer for 30 years at the Newport News (Va.) Daily Press prior to relocating the the Outer Banks. 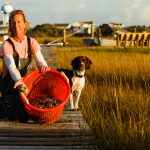