Reigning Cats and Dogs: Local Pets Put In Hours At The Workplace 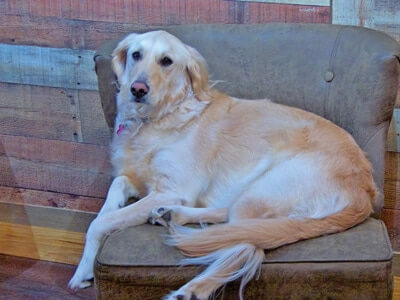 I’m sitting with Lorelei at Morning View Coffee, sipping a cappuccino and enjoying a muffin. Well, I’m sitting…Lorelei is looking at me with longing eyes waiting patiently for me to share some of the pastry.

As dogs go, she is probably the most courteous beggar I have ever encountered. No slobbering, no whining, no sniffing expectantly…she simply fixes her gaze upon me, knowing that I will do what’s right.

A svelte, attractive golden retriever, looking at Lorelei, I can’t help wonder how she keeps her figure, because it is obvious she is a master at reaching a sharing agreement with everyone who has something to eat.

“I don’t know how she does it,” says Donna Crosswhite, Morning View owner and Lorelei’s transportat5ion service. “I don’t feed her that much at home. Maybe that’s it. But Mattie (the first Morning View dog) weighed 90 pounds.”

Under a loose definition of working dog Lorelei qualifies – she does go to work almost every day.

And she is not the only working dog on the Outer Banks.

Just down the street at Secret Spot in Nags Head, Dude has taken up residence by a display of Chris Bickford’s book Legends of the Sandbar. He’s relaxed, cocking an eye at customers as they walk in the store, but beyond that, he doesn’t seem too inclined to move.

He’s been a fixture in the store for 12 years, owner Leanne Robinson tells me. 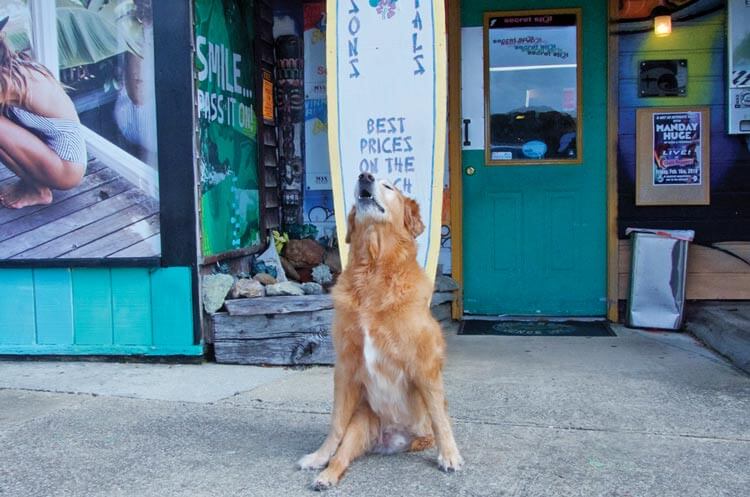 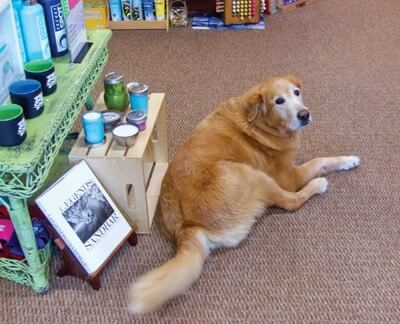 “I lived upstairs when I first got him. It was natural for him to come to work. Now it’s just his home,” she says.

Dude is somewhat famous—he has his own line of T-shirts. “It kind of started as a joke, but it ended up being one of our best sellers,” Leanne tells me.

More than a pretty face, Dude does perform an important task. “He’s really good with babysitting kids so parents can shop,” Leanne notes.

He also has three legs – a result of what we’ll call the Doug Syndrome.

Doug was the lovable dog in the movie Up who could resist everything but a squirrel…much like Dude.

He and Leanne were on a bike ride when Dude spotted a squirrel.

“I still don’t understand how his back leg got stuck in the spokes,” Leanne said. For two weeks she tried to save the leg, finally realizing that it couldn’t be done. If the loss of a leg affected Dude, though, it wasn’t apparent.

“The day that they amputated it, he was running up and down the stairs. It didn’t seem bother him a bit,” Leanne said.

When Dude does move he gets around pretty well, but when it comes to an Outer Banks style athletic working dog, the top prize has to go to Trotsky. 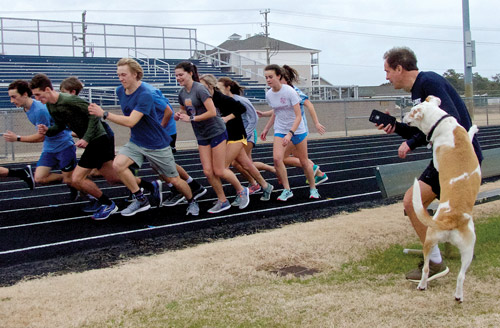 Trotsky has so much fun on the track. 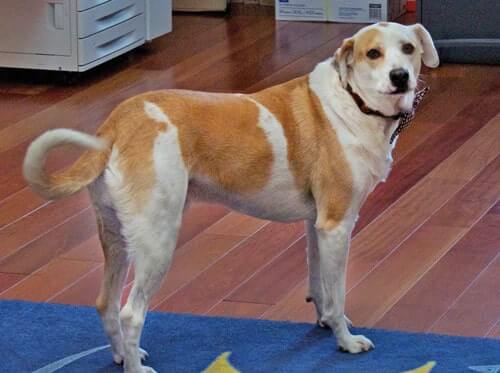 “Set…” is Trotsky’s signal…he starts barking and jumping up and down. The team is off, Chris and Trotsky sprint across the infield to check the splits, Trotsky getting there before anyone else.

The original name was not Trotsky, Chris explains. He adopted him at a Town of Duck event in 2013 where the SPCA had some rescue dogs. “His name was Trotter,” he recalls. “But it just became Trotsky.”

He’s a mixed breed, with a surprising amount of golden retriever in him—surprising because he doesn’t look at all like a golden.

Trotsky is not there by himself. Murph, a chocolate lab, has made the trip with him, although his role seems more observer than participant.

Trotsky’s coaching must be doing something right—at the state competition in February this year, Alex Rodman placed first in the women’s 1600 meter, Skylar Stultz first in the men’s 1000 meter and Zach Hughes was second in men’s 500 meter.

For the most part, working pets on the Outer Banks are scattered among individual locations. But there is an exception to that rule.

If there is a center of working pet businesses, it has to be Seagate North in Kill Devil Hills.

That’s where Theo, the anomaly to the world of working dogs spends his time.

A handsome golden, shorthair cat of indeterminate breed, if asked he would probably indicate that he rules from the Holistic Pet Shop but the entire shopping center is his domain.

We find him at A Penny Saved, the consignment and thrift store. Deborah Khan, the owner of Holistic Pets asks Theo if he wants to head back to the shop. He considers the question for a moment, saunters to the door and makes his way to the shop where he takes up his position at the front counter. 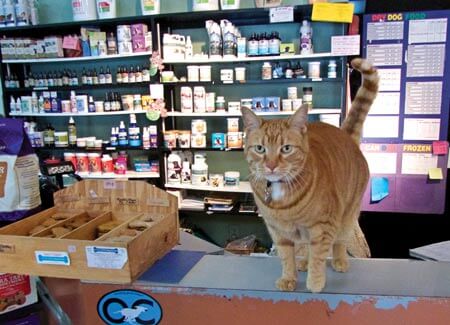 “He just knows,” I’m told. With most of them, he stays put. With others, he heads to a high shelf.

Theo rules over a realm that includes at least five dogs that regularly come to work.

Norris. a full-throated chihuahua greets me at the door of Brad Price’s Hang 12 Studio. “He was a rescue,” Brad says. “We literally found him under a house.” After a month in the pound, no one claimed him and he had a new home. 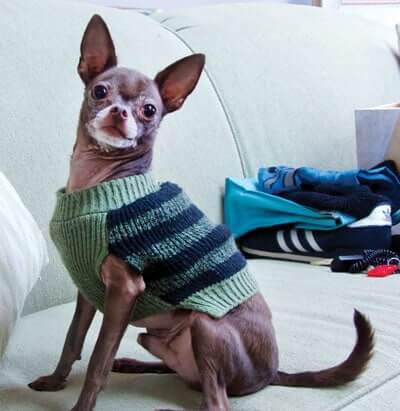 On the other side of the shopping center, Peachy makes regular appearances when Ronnie Swaim is in the Jubilee Music Store. “Sometimes my wife drops him off. Sometimes he comes in with me.”

If there is a star of Seagate North it’s Sadie at Tri Outer Banks Sports.

Friendly and patient, she seems perfect for the store.

“She greets everyone. She eases people,” owner Debbie Luke says. “A kid will sit over here for an hour while the parents shop. The parents love that.”

As is the case with any star, she has her designer clothes – a T-shirt. “It sold really well,” Debbie says. 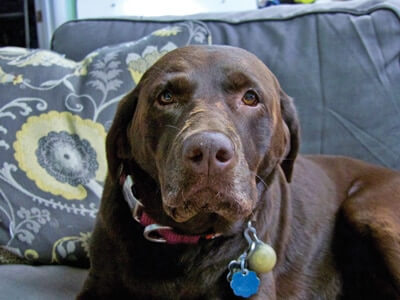 Sadie is hanging out on this particular day with Coqui, whose usual home is the Sun Shack Tanning Salon.

Coqui is a small dog, named after a small Puerto Rican frog that is endangered—a fitting name because she’s a rescue dog from a vacation to the island.

Back at the Sun Shack, her buddy Tanner is lounging about. He looks up expectantly when the door opens…his tail begins to wag…a scratch behind the ear leads to a look that clearly says, “Hey, you’re not done yet.”

The petting goes on, Tanner is happy and a question about his job to Chris Rauscher the owner gets an obvious answer.

“They’re magnets to get people in the store,” she says.♦ 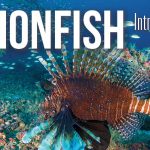 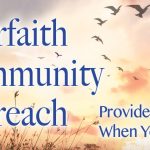