The cold December wind whips up against houses, the chilling rain patters on rooftops at 5 a.m., and most of the Outer Banks is still warm and snug under blankets. But that’s not the case for a handful of diehard boot campers on the island who are dedicated not only to their workout, but also to the group they work out with.

It doesn’t really matter which fitness family they belong to, these boot campers discover quickly that all they need is a little help (and encouragement) from their friends to get up and get moving in the wee hours. 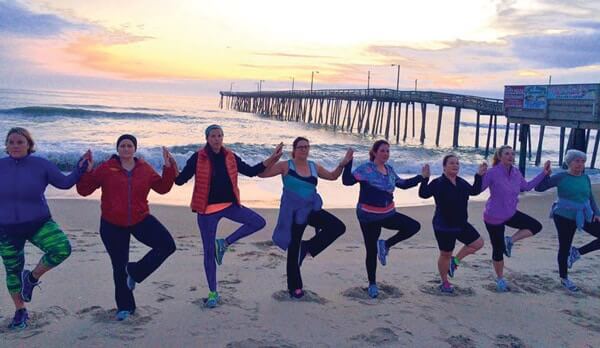 And that goes for a frigid February morning as much as it does for a balmy June one.

Fitness boot camps began gaining momentum nationwide during the 1990s and the Outer Banks was no exception. Perhaps the first to test the waters here locally was Matt Costa, who has been running Outer Banks Boot Camps for more than 15 years and brought a U.S. Marine Corps style to his program. At one point, Costa’s program became so popular that there were as many as 140 participants in his group.

With demand that high, similar boot camps – each with their own unique style – began popping up along the Outer Banks. And as they became established, it didn’t take them long to gain a popular following. Now locals can have their pick, but it’s likely that whichever boot camp they choose, they’re going to create a few bonds that extend beyond the hour or so they work out together.

Momentum Fitness Boot Camp, operated by Noah Snyder and Aaron Saunders, began as a small group of young men needing guidance and structure who met up regularly on the beach. Now it has a much larger client base and a gym at Farmdog Surf School.

And Samantha Lock at The Studio in Nags Head offers a new kind of boot camp that not only focuses on fitness, but also well-being. Called the Women’s MindBody Solecamp, Lock incorporates yoga and meditation into her daily boot camp workouts.

Those aren’t the only ones, either. Local gyms like Outer Banks Sports Club, Mmaxout Fitness OBX, and CrossFit Outer Banks also run boot camps or classes that have become about much more than just a chance to work out.

Being part of a boot camp is as much about camaraderie as it is about exercise.

As most participants will attest to, by being a part of these early morning camps they have – unexpectedly perhaps – found themselves enveloped in a family where fitness and friendships are paramount.

And across the board, all levels of athleticism seem to be accepted, embraced, and nurtured during these early morning sessions.

At no time is that more needed perhaps than during the winter months, when the Outer Banks can be hit with some weather that isn’t exactly what one would call “pleasant” to work out in. Staying motivated can be a challenge, but it seems to be contagious among boot campers.

Jen Mehall began going to the Women’s MindBody Solecamp at The Studio in Nags Head last winter for just that reason. “I need motivation to get outside at that time of year,” Mehall says. “I found that the second I arrived, I was part of a family. You don’t feel like an outsider, even when you are new there.”

Mehall says that the camp, led by Lock, is held inside, at the beach, or in Nags Head Woods. Lock, Lock, she said, often takes advantage of nearby Nags Head Woods. The shelter from the wind often makes it the perfect place for an early morning run.

Boot camp organizers are skilled at mixing up workouts and that’s another thing that can help beat the winter doldrums, say Mehall and other boot campers.

“Everyone is so good about motivating each other,” Mehall adds. “If someone falls behind, someone will go back and check on them. If someone doesn’t show up and we’re expecting them, we’ll start texting them to see where they are.”

Sarah Bruce also attends The Studio’s solecamp. “At the end of every class, Samantha offers a few words of encouragement and her positivity is contagious. We obviously have a bond with Samantha, but also with each other. There are a handful of us who come back month after month. That bond is what brings us back.”

Momentum Fitness boot camper Charlotte Midgett shares Bruce’s sentiments when she says that Momentum owners Noah Snyder and Aaron Saunders have become more like brothers than trainers to her since she started attending the boot camp. She adds that the two push, nurture, and encourage the group in a way that also facilitates friendships. “If someone isn’t there, there are probably close to a dozen people sending them a message asking about them,” Midgett says.

Annette Lamm also began working out with Momentum about three years ago. “You never feel like an outsider there, even if you haven’t been in a while.”

Lamm says teamwork and partnering during workouts help build camaraderie, not to mention accountability and connections. “Noah and Aaron will announce that someone is having a birthday workout the next day, or if someone in the group is going through a challenging time, we all want to make sure we’re there to support them. It’s motivating.”

Momentum Fitness owner, Noah Snyder, says that what began as a small workout group on the beach has grown into something much bigger, and it’s rewarding to see that happen. “It grew into a community, and friendships were formed. It was no longer just a place to work out.”

With a new home in the Farmdog Surf School building at milepost 10.5 on the beach road, Momentum has the flexibility of operating boot camps both indoors and outdoors. Previously, at least during the winter months, they utilized the Dare County Parks and Recreation building.

Matt Costa knows just what a fitness boot camp can become. He’s been doing it here for 16 years and models OBX Boot Camps after the ones he participated in while serving in the U.S. Marine Corps. 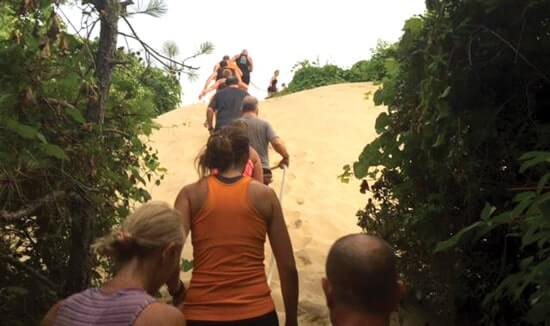 His camps accommodate all fitness levels and not only support each other, but support the community as well. It’s not uncommon to see his boot camp members clearing driveways and cleaning up debris for residents after a recent storm. The group also comes together for each other during personal struggles such as a death in the family or health problems.

“We conduct meal trains for one another and show up for funerals to offer comfort,” Costa says. OBX Boot Camps also has a large presence at local races, both supporting and participating in the events.

Costa says his boot camps are conducted outdoors year round and include plenty of friendships that have grown over the years. During sessions, he adds, there’s always plenty of good-natured competition. “We are always pushing each other and the exercise is always modified to participants’ fitness abilities.”

So after hearing what all the buzz is about, it makes it easier to understand that when it’s cold and dark and the sound of that alarm clock jars you from a peaceful sleep, all you really might need is a little help from your friends to get up and out.

“It definitely does help you get up in the morning – to have a group of friends to join and work out with,” Bruce says of The Studio’s solecamp.

One thing is certain: No matter what boot camp you choose here on these islands, fitness and friendships will likely go hand and hand. ♦

Michelle Wagner is the editor at Three Dog Ink and has been living and writing on the Outer Banks for more than 15 years. Contact Michelle 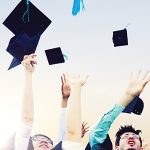 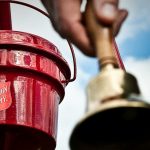